The first official press conference of the Tromsø 2014 Chess Olympiad featured players from all around the globe – Italy’s Fabiano Caruana, Paraguay's Axel Bachmann, Holland's Robin Van Kampen and Ethiopia's Haregeweyn Abera Alemu. Susan Polgar presided over events, with the focus on current world no. 3 Caruana, who explained how his American upbringing was very different from that of Magnus Carlsen, and gave his opinion on the upcoming FIDE Presidential election.

The press conference can be watched below (see all Olympiad videos here):

Robin van Kampen summed up the enthusiasm of the players when he commented on the Olympiad:

I think it’s great. First of all it’s the biggest tournament I’ve ever played in – almost everyone’s from a different country and there are so many nationalities. It’s just something I’m really glad to be part of and I hope that I’ll be able to play many more times.

Robin commented, “the Dutch, of course!” when asked who would win the Olympiad, while Fabiano Caruana felt the improving young players on the Italian team meant they could “be a challenge for other strong teams”. 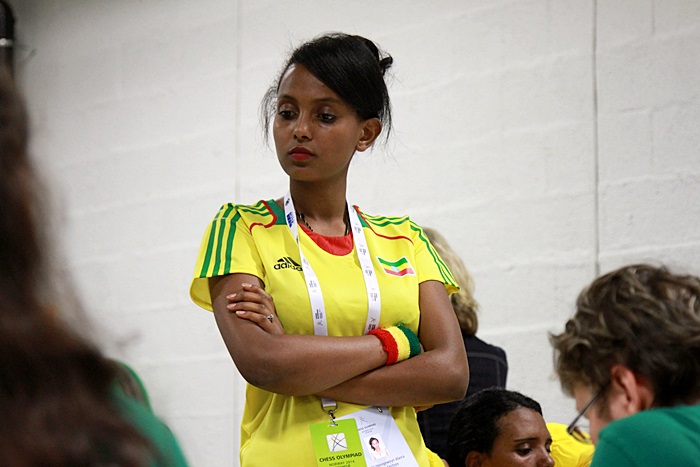 The Ethiopian women’s team is unlikely to feature on the medal table since chess is only taking its first steps in Ethiopia, as Haregeweyn explained:

People play chess, but they play just in their homes. It’s not a famous sport. Our federation is trying to make it well-known in our country.

The road to the top

Fabiano Caruana explained that the way he reached the top was influenced by his American upbringing:

I think players do it in many different ways. How I worked on chess from the beginning was very different from Magnus or from other top players. First of all I grew up in a country where the style of chess is very different. In the United States people play two games a day. I would play a tournament in one day, which is simply unimaginable in Europe. And most of the games were rapid games, so I grew up playing 30 minutes or 25.

For Robin van Kampen the secret was to work less!

Recently I’ve been playing a little bit better and I think it’s because I started to work a little bit less. After I finished high school, which I was pretty busy with, I was working like eight or ten hours a day, a little bit too much, maybe. Now maybe 5 or 6 hours, or not at all, taking some time off.

Axel Bachmann has leapt up the ratings list recently, and credits a change of location:

I would say coming to Europe helped a lot, because chess is not so popular in South America, but also I think some games that didn’t go my way before were going my way now, so it was really good.

Just after graduating I decided to work on a regular job for a few months, but then afterwards I said it was probably time to go for chess. If not now I would never do it, so I’m glad I took that decision.

Though he added later that Paraguay is doing relatively well:

Paraguay is a small country compared to our neighbours, Argentina and Brazil, but chess has been growing a lot there and they are trying to introduce chess as a subject. That helps a lot. In comparison to other American countries maybe Argentina and Brazil have more tradition but I don’t think they’re growing like we are now.

Haregeweyn isn’t working quite as hard as the others so far, saying she works “two or maybe three hours a day”. 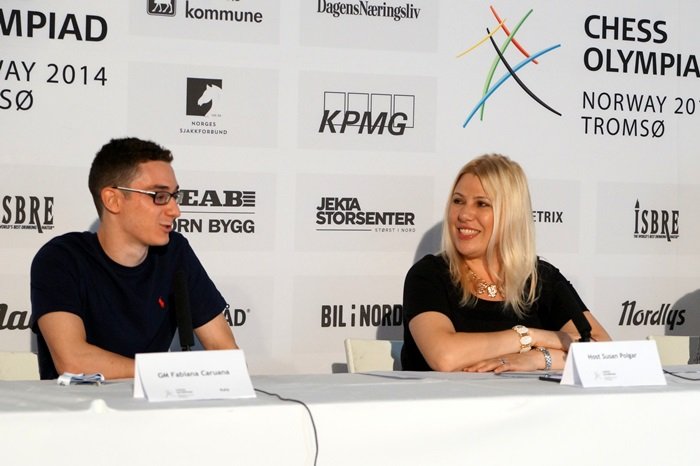 Susan asked Fabiano about his route to the top, while a member of the press asked for the star's opinion on the upcoming election | photo: Paul Truong

Fabiano Caruana is many people’s pick as the man most likely to challenge Magnus Carlsen for the World Championship title in the coming years, but he wasn’t sure when asked how he could get his chance:

That’s a good question, because the cycle is not exactly clear at the moment and I imagine a lot of it will depend on the next election. Normally the possibilities to get to the Candidates would be the Grand Prix, by rating or the World Cup and for now I’m not sure about the Grand Prix. Some venues have apparently been decided on but it’s not clear if it’ll go through, so I’m not really thinking about it for the moment.

Caruana was also asked a loaded question about who he supports in the upcoming FIDE Presidential elections between the incumbent Kirsan Ilyumzhinov and former World Champion Garry Kasparov. His response was diplomatic, but far from a non-answer!

I haven’t openly supported anyone. I think a lot of things could be improved on the current leadership. I’m not sure if Kasparov could improve on it. I’m not as convinced as everyone else that he would be as much of a change from current FIDE. I would hope so and I think that he could potentially bring a lot of sponsorship to chess and a lot of new events both at the top level and at lower levels.

The question, of course, is if he’s really willing and if he can work with the players and sponsors and organisers. Of course he has a lot of conflicts in many countries which could be a problem. So for the moment I’m pretty much undecided and I try not to get involved. At least if there’s a change I hope that it will be a very good one. I’m not entirely convinced, though.


The press conference will take place at 18:15 each day and is open to all accredited members of the press.