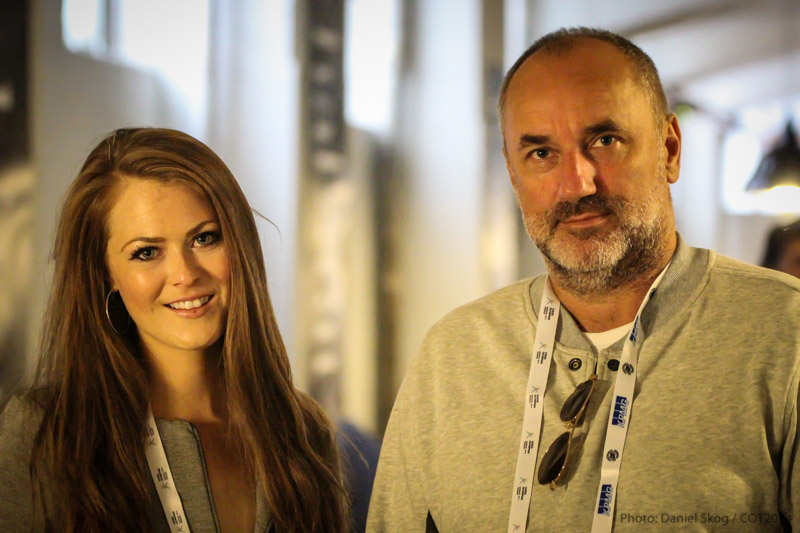 Canadian Kate Murphy is the CEO of Play Magnus, the company behind the chess app of the same name. Her ambition is to popularize cultural and educational activities for youngsters, and Magnus Carlsen seemed like the perfect man to do this with chess. Thanks to a rather remarkable set of coincidences, this unique chess playing program was launched in record time, and to rapid success.

Kate describes the app as follows:

The app is unique in that the programmers made it mimic Magnus' style at each age. All of his games are incorporated into the engine, and the openings it plays are the ones he used then. It also refuses to accept draws, just like Magnus - we get a lot of email queries about this, people send screenshots and think something is wrong!

The program has a multitude of strength levels to choose from, but instead of designating them by rating they represent Magnus at different ages. The picture of his face gets gradually older, and his style and strength mature. Magnus's manager Espen Agdestein, GM Simen's older brother and also a former Norwegian chess Olympian, tells me that the age 12 level is already scary enough, something I can confirm on a quick test run. The program is extremely easy to use even in phone format, and I feel I recognize this kid, who played in my club in those days.

Oslo proved to be the hub of coincidences - Kate was living there when the project began taking shape, and lead Stockfish programmer Tord Ramstad was too when her team began to look for someone to tailor a Carlsen engine. The timing of the Anand-Carlsen title bout seemed the perfect opportunity to turn ideas on the drawing board into an app with youth appeal.

We invited Tord to a meeting and asked if it was possible to create a program with the kind of 'personality' we wanted, and he looked at us and said, 'Of course! I can do that.' He's an absolute genius. So he sat down to do months of work and created this engine that is Magnus. And he continues to add to and optimize the program.

Our goal is, with Magnus, to give chess to more kids around the world, especially in countries that aren't so keen on chess already, making it seem cool and exciting, something they want to play after school or on their lunch hour, like football or any other sport. Magnus is passionate about kids using chess as a tool in their studies to improve their analytical abilities and their education. We see that Magnus creates a lot of excitement in general around chess, and we are thinking about how to use this for good, to use it for a cause. So we went to their devices, where the kids are.

The app, which was launched in an iOS version as a test, has been well received, downloaded in over 200 countries (more than the UN! - says Kate) and people have been clamoring for an Android version, which is now a priority and in production. New features are also planned, with multiplayer functions to make it possible to earn points by playing friends as well. Points?

The reason points are important is that users will be playing against each other and the engine in order to get a chance to play Magnus live. We're having an annual event where top point scorers and a few chosen at random - so everyone has a chance - in four categories, beginner, intermediate, advanced and expert, will play blitz with Magnus in person.

The app is a free download. There are ads and an ad-free upgrade but we didn't want to charge for the app, the whole point is to get it out to kids. It's not all about money here!


Magnus and I are very excited about this – bringing chess to the world is one of his goals. We feel confident that this project will continue to grow. Myself, I play it every day. It's much more fun to play Magnus, even as a computer, than just other engines. You get a human touch as it resembles his style at different ages. And it also makes it more fun when you win – you feel like you get to beat Magnus!