Journey to the National Chess Championship! 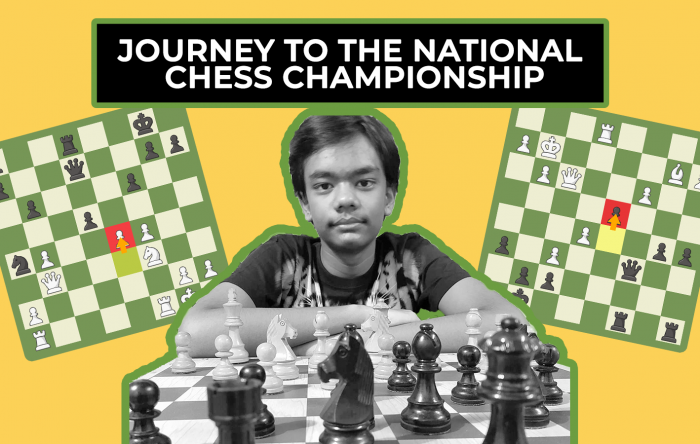 From the very first beginning of my chess career, I always wanted to participate in the National Chess Championship. I used to go to the venue and watch all the games when I was very young, and it inspired me a lot! I got my first ever FIDE rating in 2013, but I started playing chess seriously two years later.

Next year, I played in the event again. Even though I increased rating in the tournament, it didn't go the right way. I lost 4-5 games and scored only 5.5 out of 11 rounds. 2018 was very important to me. I again played in the National "B" event and this time, I desperately wanted to qualify in the National "A" Chess Championship. The 1st round was disappointing because I lost the game from a completely winning position.

I was in my preparation and pointed out 15...Bxh4 which was a very nice idea, but in the end, I blundered and lost the game. I was really disappointed after this game. But somehow, I was able to settle my mind for the next rounds and went on to win 5 games in a row!The 6th round game was interesting, as my opponent launched a devastating attack on the kingside. But in the end, I won the game!

Alapin is an opening that I always feel uncomfortable playing against. The move 26...Qc6 was very important and I was very happy after finding that moveBut in the 8th round, I lost a disastrous game. I was taken out of my preparation and I played very bad.

So, the last round was very important. If I win, then I might qualify for the National "A" Chess Championship. Before the match, I took no preparations at all! This is a method I very often follow😁

At the closing ceremony, it was announced that I became 12th and was the last person from that event to qualify! Only 12 players qualify to the National "A" Chess Championship and I became 12th! I also increased 122 Elo points in the event! So, at last, I achieved one of my dreams. But it is not finished yet! My performance in the National "A" was another achievement which I will share in my next blog!